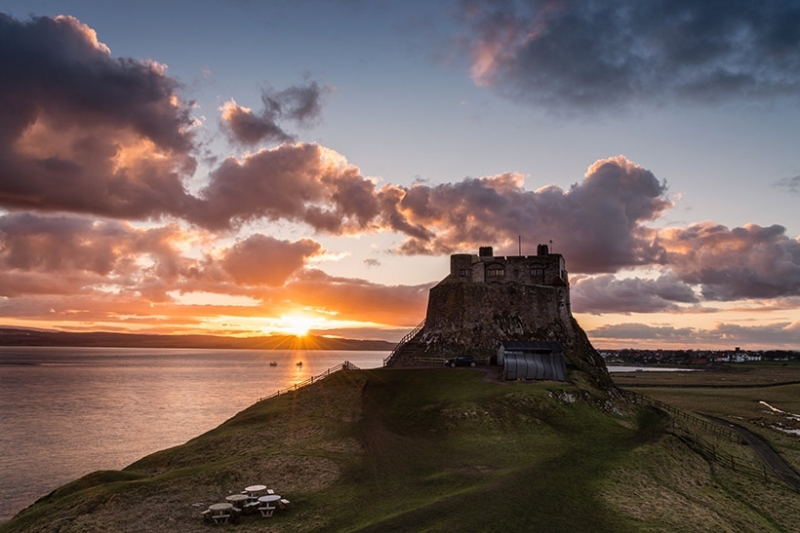 This pilgrim path to Holy Island begins in the Scottish Borders, where St. Cuthbert started his religious life in 650AD. It extends 100 km by riverside, hill and moor then across the causeway at low tide to arrive on Lindisfarne, the Saint’s resting place

This long distance walking route follows in the footsteps of St Cuthbert, stretching some 100km / 62.5 miles across the Scottish Borders to the Northumberland Coast of England.

The start point is Melrose, to the south of Edinburgh and easily accessed by train. This was the location of St Cuthbert's early monastic life. The Way tracks the chronological sequence of the Saint from his earlier days in Old Melrose to his later life on Lindisfarne - the Holy Island. Holy Island is reached on foot by crossing a tidal causeway at certain times of the day and is subject to periodic closure in rhythm with the tides.

The St Cuthbert Way can be divided into 4, 5, 6 or 7 days with stopping points at places such as Maxton, Cessford, Hethpool and East Horton and Fenwick. We will tailor the route to suit your requirements. Please note that the Fenwick stop may be required for reason of tidal times on the causeway to Holy Island. We will advise you of our recommended hour depending on your preferred time of travel.

From the gates of Melrose Abbey, the path takes you over the saddle of the Eildon Hills - one of the most recognised Scottish Borders landmarks. Proceeding south to Bowden is you have wide-open views over the Cheviot. The route passes through Newtown St Boswells where you spend a delightful couple of hours walking along the banks of the Tweed. Join an ancient path called "Dere Street" - a famous Roman road running north between York & the River Forth. The end of the walk reaches the woodlands of the Harestanes Visitor and Nature Centre, with accommodation in the nearby.

You can take an optional walk to the C7th monastic site at Old Melrose, via the site of the Roman Trimontium Fort. Old Melrose has interpretive displays detailing the story of St Cuthbert, the life of the early monks and the nature of the Old Melrose area. The return path uses the 'Monks Trail' to cross the River Tweed at Monksford and passes by Thomas the Rhymer's Stone on the Borders Abbeys Way, to arrive at the Cistercian Abbey in Melrose.

A strenuous day with at least 6 hours walking back on Dere Street heading south, to cross the Teviot River and Jedwater. You go over the highest and midway point of St Cuthberts Way (50km) at the summit of Wideopen Hill. The path skirts woods of pine and silver birch, with dramatic views north over the Teviot Valley and the Eildons visible in the distance.

The final stages of the walk take you past the Romany Marsh a small wildlife reserve. The twin villages of Town & Kirk Yetholm are the home of the Scottish Gypsies, traced back to James V and the Gypsie Palace still remains and is passed tomorrow.

The Scottish route continues for 2 miles before crossing the Border into the Northumberland National Park. Climbing gently from Kirk Yetholm, the route passes the Scotland - England border marker and slowly descends to Hethpool. Then a slow climb of Yeavering Bell and Easter Tor which traces it's history back to around St Cuthbert's time when Paulinus was said to have brought Christianity to the community. The path then descends through a forest into Wooler where the walk ends in a small market town in the Glendale area with hotels, B&Bs and plenty of shops.

The final section from Wooler proceeds east through a conservation area, with significant prehistoric remains. Then on to the National Trust Woods near to St Cuthbert's Cave. This cave is where the body of St Cuthbert was brought by the Monks in 875 as they escaped the invading Danes. From the Cave, it's only 5 minutes to the top of the Greensheen Hill and on a clear day you can pick out the Holy Island and the causeway to the NE and south to Bamburgh Castle with the Farne Islands offshore. This part of the Northumberland coast has been designated an Area of Outstanding Natural Beauty. St. Cuthbert's Way joins here with St. Oswald's Way, leading you towards the village of Fenwick. Here you will take an overnight pause to await the low tides and the chance to walk the sands to reach your island destination.

From Fenwick the Way now proceeds to the coast, crossing the main east coast railway line and past World War 2 coastal defences. Once you cross the railway line you arrive at the Beal end of the causeway. Once you reach the Causeway at low tide you can choose your final approach to Lindisfarne -

A) By the Causeway Road across to Holy Island - known as the Shell Road.

B) Follow the posts of the historic Pilgrims Path across the sands. Be prepared to cross with bare feet or have some wellingtons.

The Priory is the end of the walk and at the heart of this community.

Lindisfarne is still regarded as the holiest place in England and attracts most visitors by car.

There is also the Castle perched high on Castle Point t(currently undergoing a major refurbishment), but you can visit the Gertrude Jekyll Garden and an interesting Nature Reserve.

PLEASE NOTE:- It is possible to walk from Wooler to Lindisfarne in one day, But we will account for the timing of the tides as the Causeway and Pilgrims Path are closed for significant periods every day. The Pilgrims Path over the sands remains underwater for up to 4 hours extra per tidal cycle. We will provide you with safe crossing times according to your dates. 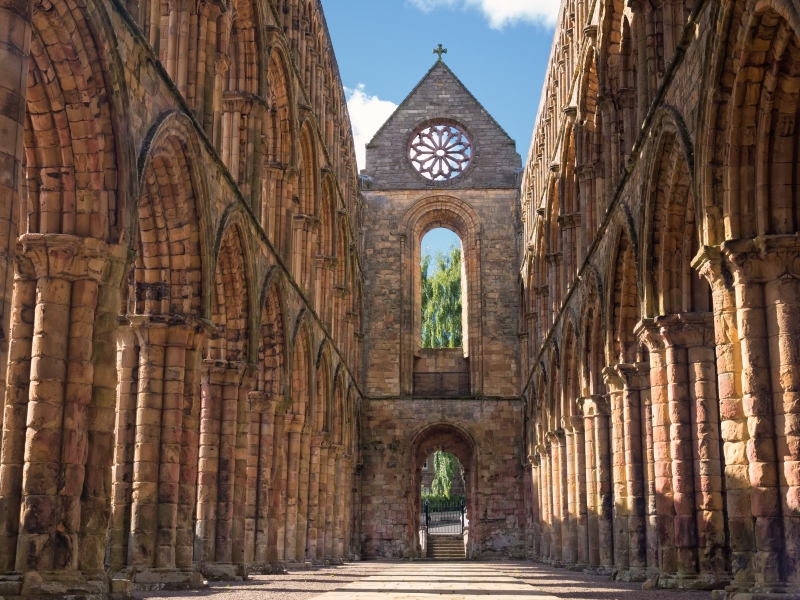 The picturesque town of Melrose is located next to the Eildon Hills. The triple peaks of the Eildon Hills are the most distinctive landmark in the Scottish Borders. At their feet in the valley of the Tweed lies Melrose.

Make sure to visit the ruined Melrose Abbey dates from 1136. A casket discovered believed to contain the heart of Robert the Bruce was marked by a re-burial ceremony and commemorative stone tablet.

The area around Melrose has been inhabited for thousands of years. The Roman army arrived in AD79 or 80 and built a major fort nearby named Trimontium, 'Place of the Three Hills'. A signal station or shrine was built on the summit of the Eildon Hill North. The Three Hills Roman Heritage Centre houses the Trimontium Museum which is dedicated to Roman life in Scotland.

There are two National Trust for Scotland gardens in the area: Priorwood and Harmony Gardens which is a beautiful walled garden with magnificent views over the Abbey and Eildon Hills.

You can take a short walk 3 miles westwards, along the banks of the Tweed to Sir Walter Scott's home, the romantic mansion of Abbotsford.
https://www.scottsabbotsford.com/visit

In Spring the town is buzzing with the Melrose Sevens tournament. The town is also the birthplace of Rugby Sevens. You'll enjoy a carnival atmosphere at this action-packed international tournament, which regularly attracts teams from places such as New Zealand, South Africa, England, France and Portugal.
https://www.melroserugby.org/

It's all haggis, porridge and shortbread?

Every hiker knows that local food takes centre stage on any walking holiday. And in Scotland, you can be satisfyingly fed and watered on our finest meats, fish, cheeses, vegetables, craft beers and malt whiskies.

Traditionally, Scottish food was wholesome, tasty, filling and simply prepared without fuss, with the purpose of keeping folks warm and providing the energy required for a hard days labour. It was all about stews, broths and porridge.

Scotland is not short of sublime gastronomical experiences. We have an array of Michelin starred chefs and fabulous restaurants serving not just Scottish, but also International & fusion cuisine.

In terms of the St Cuthberts Way, you'll mainly find good pubs serving traditional hearty meals. Just what the hungry hiker, cyclist and mountaineer require at the end of an active day in the hills and glens.

Here is a taster of the three of the many great hotels, B&Bs and guest houses with whom we regularly work.

We recommend a night in Melrose before setting off on the trail. If you travel down from Edinburgh on an early train, you'll find plenty to keep you busy for the day here.

This will allow ease of bag collection by 9 am and a fresh start to your first day on the trail.

You can also take a walk to the site of old Roman Melrose, where there is an ongoing archaeological dig and information on the early beginnings of Melrose. 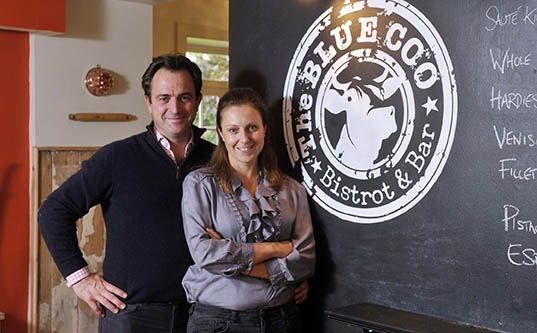 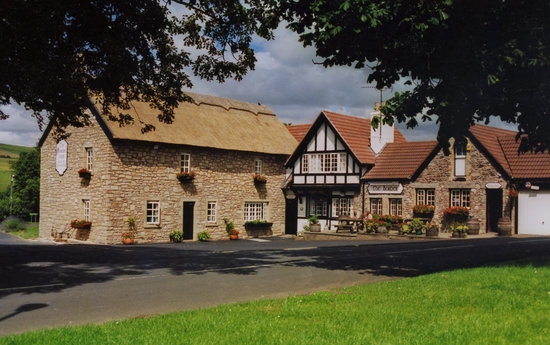 Our historic hotel in Kirk Yetholm 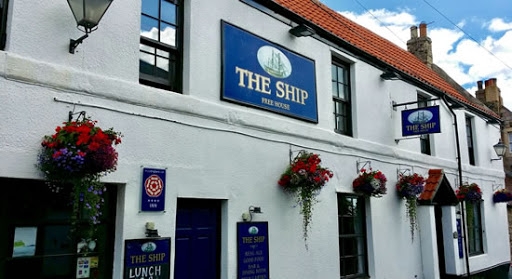 One of our hotels on the Holy Island of Lindisfarne

Our baggage transfer service will transport your luggage each day by vehicle, so all you will need to carry is your day pack. This really does make a significant difference to your enjoyment.

We work out the logistics so you can relax and enjoy yourself. All you have to do is consider carefully how far you want/are able to walk each day.

It's easy to get here from Scotland's airports using the bus and/or train. The route begins in the Borders town of Melrose which has a nearby railway station, making it easily accessible from Edinburgh.

Once you've finished in Lindisfarne, you can catch a train or bus back north to Edinburgh, or continue your adventures.

Just ask us to book your local travel tickets.

647 pp
Based on 2 sharing twin/double accommodation, B&B with luggage transfer 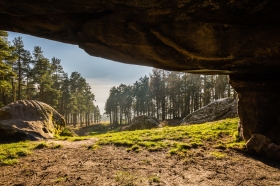 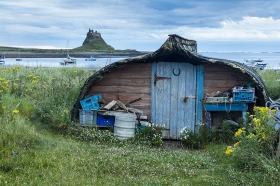 The Eildons from Scott’s Viewpoint 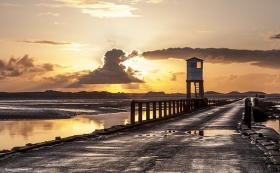 Across the Causeway at Low Tide 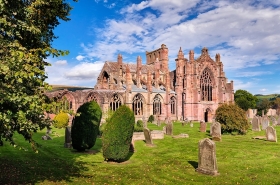 The WHW is right on our doorstep and we meet walkers everyday in our town centre. So, we really do know everything your need for a well supported trip on this iconic Scottish Highland route.

Walk The Camino
A specialist organiser of tailor-made walks and tours on the Camino de Santiago and other parts of Spain.

Spain Food & Travel
Made to Measure Tours Throughout Spain by rail, car, bike and hike with a focus on great regional gastronomy.